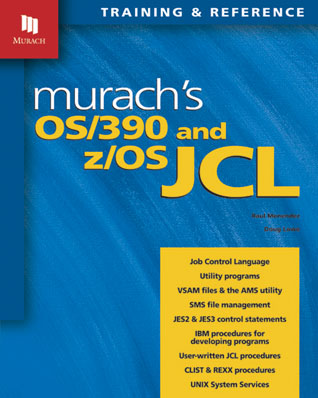 This is our classic book on JCL (Job Control Language) for the OS operating system on IBM mainframes. Since the first edition was published in 1980, more than 200,000 mainframe programmers have learned JCL from it. And those JCL skills are still relevant today. In fact, although this book was published in 2002, it still presents the core JCL skills that you need for getting a job in a mainframe shop today.

But this is far more than a JCL book. Besides JCL, it does a great job of introducing the IBM mainframe environment, which is so foreign to anyone who has been working on another platform. That includes VSAM data management and Access Method Services, OS utility programs, the sort/merge utility, TSO, CLIST, REXX, and Unix System Services.

I was recently assigned to a JCL-related software project, so I was in urgent need of an excellent JCL Reference. Murach’s JCL book fit the bill. The introductory chapters give beginners an excellent guide to the Mainframe environment, and there are comprehensive chapters on everything from basic JCL syntax to restarting JCL jobs.”

Posted at an online bookseller, March 2012

Who this book is for

Since the 1960s, the OS operating system in its various releases has been used to run IBM mainframes, the powerful computers that handle thousands of transactions every day in large companies throughout the world. This book was written for the current edition of OS, z/OS, and its immediate predecessor, OS/390. But because IBM software is upward-compatible, everything in this book should work on subsequent releases as well.

Job Control Language, or JCL, is the language that controls the operating system. So if you’re working as a programmer or operator on a mainframe, you need to know JCL. Although programmers often get by with minimal JCL skills, the best programmers develop a solid set of JCL skills because it helps them get more done in less time.

The intent of this book is to teach you JCL. If you’re completely new to it, this book will start you from the beginning. But if you already have some JCL skills, this book will raise you to a new level of mastery.

Along the way, you’ll learn how to use many of the facilities of z/OS and OS/390, including ISPF, Access Method Services, utility programs, the sort/merge utility, TSO, CLIST, REXX, and Unix System Services. When you finish this book, you’ll have a rich view of what the operating system can do, and you’ll know how to take advantage of those capabilities on the job.

What each section of this book does

Section 1: Get to know your system

Find out what’s going on in the IBM mainframe environment so you’ll know how the JCL you code affects the system’s processing. You’ll see how OS/390 and z/OS build on earlier operating systems, and why the JCL you learn today will work for many years to come.

Section 2: Start coding JCL for your own jobs

Learn how to code the JCL you’ll use every day on the job to run programs that process disk, tape, and print files. You’ll also learn how to create and use stored procedures, which can save you dozens of lines of JCL coding.

Learn the time-saving JCL features that you’ll use regularly, but not every day. That includes error handling techniques, generation data groups (GDGs), and SMS (the Storage Management Subsystem that takes care of many file-handling tasks automatically).

See how easy it is to code the JCL for jobs that use VSAM files. Then, learn how to use AMS (the VSAM utility) to create and manage VSAM files, including how to create alternate indexes for key-sequenced data sets.

Section 5: System tools for the programmer

Learn how to use some of the work-saving tools that OS/390 and z/OS provide for program development, including: compilation procedures; utilities for jobs like sorting and copying files; procedure building tools like CLIST and REXX; and Unix System Services, a facility that lets you access files designed for Unix systems.

Who this book is for

If you’re a programmer trainee, this book represents the fastest and best way to get started with z/OS or OS/390 JCL. By the time you complete the first nine chapters of the book, you’ll have most of the knowledge and skills that you need for programming. Then, you can build on those skills whenever you need to.

If you’re an operator or an operator trainee, we don’t know of a better way to get the JCL training that you need than using this book. Of course, there’s more to being an operator than knowing JCL. But this book will give you the JCL background that every operator needs, and it will be the first reference that you turn to when JCL problems arise.

Why you'll learn faster and better

Chapter 3 of this book gets you started using ISPF, IBM’s standard platform for application development under OS/390 and z/OS. With that start, you’re ready for MVS TSO, Part 1: Concepts and ISPF, which will teach you how to use all the ISPF facilities you need for program-development tasks.

Likewise, chapter 20 introduces you to TSO commands and CLIST and REXX procedures. But to become proficient at using these features, you need MVS TSO, Part 2: Commands, CLIST, and REXX. (MVS is the base operating system that underlies OS/390 and z/OS.)

We also have these books for IBM mainframe programmers:

Murach’s CICS for the COBOL Programmer

DB2 for the COBOL Programmer, Part 1

2 books in 1! A fast-paced training guide for COBOL beginners and entry-level programmers…an indispensable, on-the-job reference for anyone who works with COBOL.

To view the table of contents for this book in a PDF, just click on the link below:

Chapter 9: How to use JCL procedures

This chapter teaches you how to use IBM's procedure facility. With this facility, you can code just a few JCL statements to execute procedures that contain dozens or even hundreds of JCL statements. By the end of this chapter, you'll be able to execute existing procedures and create new procedures of your own, including those with symbolic variables. And you'll see why so many IBMers keep a copy of this book within easy reach as their first choice for training and reference.

The JCL code in the book

This download unzips into a 66-page Word document that contains the JCL coding segments and job streams that are used as examples in the book. That way, you can copy them and use them in your own code.

On this page, we’ll be posting answers to the questions that come up most often about this book. So if you have any questions that you haven’t found answered here at our site, please email us. Thanks!

To view the corrections for this book in a PDF, just click on this link:

Then, if you find any other errors, please email us so we can correct them in the next printing of the book. Thank you! 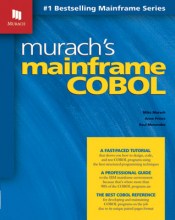 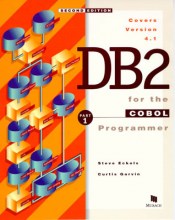 DB2 for the COBOL Programmer, Part 1 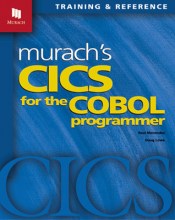 Murach’s CICS for the COBOL Programmer